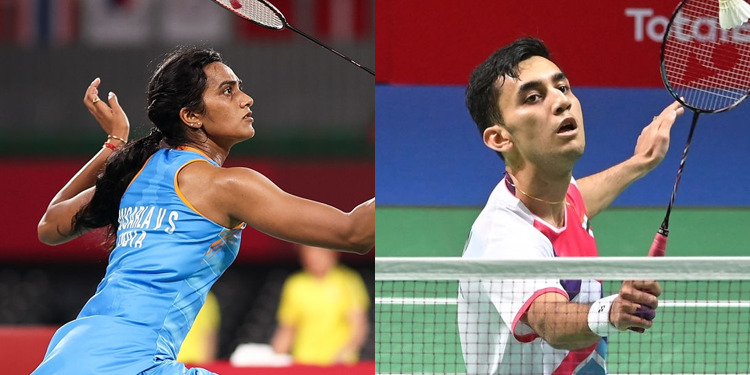 Defending champion PV Sindhu and Kidambi Srikanth stormed into the quarterfinals of the BWF World Championships with straight-game wins in their respective singles round of 16 matches here on Thursday.

World number 7 Sindhu defeated Pornpawee Chochuwong of Thailand, ranked three places below her, 21-14 21-18 in the pre-quarterfinal match that lasted 48 minutes.

With the win, Sindhu, seeded sixth in the showpiece tournament, extended her head-to-head record against Chochuwong to 5-3.

Sindhu also avenged her twin loss to Chochuwong this season — group match of BWF World Tour Finals earlier this month and All England Championships in March.

Indians, however, suffered defeats in both the women’s and men’s doubles in the pre-quarterfinals.

The women’s doubles pair of Ashwini Ponnappa and N Sikki Reddy lost 13-21 15-21 to the Thai duo of Jongkolphan Kititharakul and Rawinda Prajongjai.

The men’s doubles pair of Satwiksairaj Rankireddy and Chirag Shetty suffered a 20-22 21-18 15-21 defeat to Ong Yew Sin and Teo Ee Yi of Malaysia.

The second game was a tighter affair though Sindhu began on the front foot with a 3-0 lead. Sindhu led 11-6 at the change of ends and the second half saw some long rallies with the Thai player winning a few of them.

Sindhu won a crucial point after a long rally to make it 20-18 before winning the second game and the match.

Sindhu, who got a first round bye, had beaten Slovakia’s Martina Repiska 21-7 21-9 in the second round on Tuesday.

Lakshya Sen and H S Prannoy are scheduled to play their round of 16 matches later on Thursday.

BWF World Championships LIVE – 4 Indians in Quarterfinals: Indian badminton team has created history at the World Badminton championship. For the first time ever 4 single players have made it to the last 8 of the event. PV Sindhu in Women Singles, HS Prannoy, Kidambi Srikanth & Lakshya Sen in the Men Singles sealed Quarterfinal berths on Thursday night.

4 Indians in Quarterfinals: HS Prannoy and Lakshya Sen sealed their places in the quarter-finals with thrilling wins late in the day in the ongoing BWF World Championships.

Prannoy stuns Rasmus Gemke: The win of the day came from HS Prannoy for India. Prannnoy registered comeback victory over 11th seed Rasmus Gemke of Denmark. Prannoy lost the 1st game 16-21 but came back to take the 2nd in style by 21-8.

Kidambi Srikanth is one of the few seeded Indian players and he showed his class as he progressed into the round of 16. The Indian ace clinched an opening round 21-12, 21-16 win over Pablo Abian, before following it up with a come from behind 15-21, 21-18, 21-17 to make it to the pre-quarters. Srikanth will now face a stern test in Guang Zu Lu and will hope to make it to the quarterfinals of the BWF World Championships. The duo have met only once previously with Srikanth winning the clash at the Indian Open back in 2019.

The world number 7 Indian defeated her Thai opponent, ranked three places below her, 21-14 21-18 in the pre-quarterfinal match that lasted 48 minutes. With the win, Sindhu seeded sixth in the showpiece tournament, extended her head-to-head record against Chochuwong to 5-3.

PV Sindhu BWF World Championship: Women’s doubles pair of Ashwani Ponnappa and N Sikki Reddy on Thursday lost in the pre-quarterfinals match of the ongoing BWF World Championships 2021 in Huelva. The Indian pair got defeated by Thailand’s Jongkolphan Kititharakul and Rawinda Prajongjai in straight-sets 13-21, 15-21, in a match that lasted 38 minutes. Ponnappa and Sikki earlier defeated Liu Xuan Xuan/Xia Yu-Ting 21-11, 9-21, 21-13 in 51 minutes to enter the pre-quarterfinals.

Srikanth – Sindhu seal last 8 berth: Earlier in the day, Kidambi Srikanth made the quarter-finals with a stunning straight-sets win over Lu Guang Zhu.